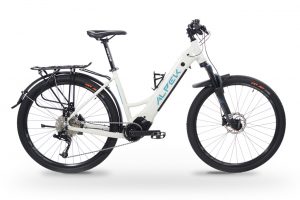 It is a simple ride for everyone, suitable for all types of bikes, a tour that leads to the discovery of Turin across the river that crosses it. The tour starts from our shop just behind Piazza Carlo Felice. Starting from the center of Turin and heading towards the Po river, you will follow the hilly embankment, riding through the greenery of the Po banks in complete tranquility, without losing sight of some of the most beautiful places, such as the Castello del Valentino, the Medieval Village, the Church of the Great Mother of God.

The Borgo Medievale (Medieval Village) is located inside the Parco del Valentino and was born as a project of “ancient art” on the occasion of the Italian General Exhibition in Turin in 1884. It is very impressive because it leads to a reality that immediately takes you back to the mysterious medieval period . In fact, it is thanks to the architect Alfredo d’Andrade who participates in the initial project and the great renovation work in the years to come, so much so that the lace, the drawbridge and the shape of the details give the impression of being in a true urban context still active. The Fontana del Melograno (Fountain of the Pomegranate) is a wonderful, perfect imitation of that of the Castle of Issogne. Actually, many of the architectural components of the village are copies of the medieval artistic and cultural baggage of Piedmont and Valle d’Aosta and the function of the complex is to pass on the art, the technique and the typical uses of the time. Proceeding in the direction of Piazza Vittorio, after the borgo you will encounter the Castello del Valentino which many believe to be the real borgo. Instead, the Castle is still the site of a part of the faculty of architecture and adjacent there is the famous botanical garden used as a bank to share the knowledge of various plant species for more than 200 years at the behest of Vittorio Amedeo II.

Once past the Valentino arc, you pass over the Murazzi, the heritage of the City of Turin right, right under the bridge (right bank); the famous arches were the landing place of the boats that during the industrial era made back and forth along the river and later became an international symbol of the Turin nightlife. They absolutely deserve to be seen.

After the Vittorio Emanuele I bridge that connects the Gran Madre to Piazza Vittorio the route passes on the right bank of the Po where you enter Viale Michelotti. The stretch was the seat of an important canal used in the past by the Turinese for the production of hydraulic energy which was later abandoned and covered with the rubble of the restoration of Via Roma. Now there is only the green area that connects the city to the town of Sassi, wonderful to walk on sunny days with the rays filtering in the shade of the branches. Further up the catwalk on the Chiaves-Carrara river, you will see the monument erected for Fausto Coppi, the famous cyclist who won 5 times in the Giro d’Italia and two times in the Tour de France.

When you pass the Ponte Sassi (Sassi bridge) it means that the Viale Michelotti is finished and you are about to enter the verdant Meisino park on Via Nietzsche. This park, located at the mouth of the Stura river, is one of the main green lungs of the city with its 250 hectares where it is possible to observe many species of birds that find shelter in there, including the elegant Gray Herons. Inside the park there is also a riding school, once a military gallop that today makes it very active and a destination for families.

Continuing past the Diga Bridge on your left you see the Spiaggetta Paradiso dei Cuori (Paradise of Hearts beach) known as the friendship beach and also cited by Calvino in his Marcovaldo; an oasis of peace on the banks of the river that has long welcomed Turin’s inhabitants in the most sultry days.

You are almost arrived in San Mauro. Here, you should see Ponte Vittorio Emanuele, also knwon as the ”Ponte Vecchio”, the unfailing symbol of the area that connected Bertolla to the city center. San Mauro Torinese is an important town, which has always been a point of connection with the hilly area at the foot of the Basilica of Superga and land contended between the Duchy of Savoy and the Marquisate of Monferrato. The origins of San Mauro Torinese are to be attested before 990 AD and the initial function was that of an abbey, a complex of assets managed by an abbot. The original name of the city was Pulchra Rada, “Beautiful beach”, a name that reflects the beauty of these placid shores that have inspired writers and poets. Worth seeing in San Mauro is the Church of Santa Maria di Pulcherada shortly after the bridge entering the town. The church is in Romanesque style in stones and bricks and frescoed and here have been found various tombs of Lombard populations as well as a beautiful fresco of the Christ Pantocreator of 900 years ago.

At this point you return to Turin on the other side. Here is the Isolone Bertolla located on the left bank of the Po, separated by a “mezzino” Park from the river. A strip of artificial land adjacent to the Confluence which, together with the Meisino Park, creates a natural reserve suitable for activities such as bird watching. The island, which is not reachable on foot, also plays a very important role as it is housing endangered species of ducks that come here for the winter, welcomed by a better climate and native flora. Continue to Barriera di Stura and cross Ponte Amedeo VIII, returning safely along the Colletta Park. Pietro Colletta the real name of the park is right in front of the Meisino between the confluence of the dora and the stura, think that once here there was another hunting lodge of the House of Savoy which later became a tobacco factory and finally a park.

You must be hungry, now… Surely, if you don’t want to have a hearty meal you can stop on the Lungo Po and eat a quick sandwich that you have brought with you or otherwise you can look for some refreshment point on the road if you want to be more comfortable. Since you are in the city you have a choice. I suggest you finish the tour by stopping in Piazza Vittorio to take a break, have a beer, eat something or even treat yourself with a proper aperitif. Did you catch your breath? In a matter of minutes from here you arrive up to the Turinbike passing in the middle of the pretty city center, taking a last look at the Parco del Valentino with the green Turin hills at your back. A ride with your family, also for the kids for the the ease of the routes, rich in green areas and for the most part far from traffic.